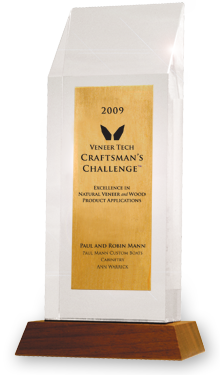 PAUL MANN CUSTOM BOATS OF MANNS HARBOR, NC, was named winner of the Cabinetry category in the Fifth Annual Veneer Tech Craftsman’s Challenge™ woodworking competition for the design and technical skill exhibited in the veneer cabinetry throughout the 76-foot custom sportfishing yacht Ann Warrick. The award was announced at the Las Vegas Hilton during the Association of Woodworking and Furniture Suppliers (AWFS®) Show held in Las Vegas July 15-18. The custom yacht builder was presented a check for $1000 along with a trophy, and the Ann Warrick will be recognized nationwide in print and electronic publications by both the boating and woodworking industries.

Robin Mann of Paul Mann Custom Boats said, “We are very happy to be recognized for our cabinetry work and even more excited to be selected by such elite woodworkers and in such a well-known and respected competition. We are proud of the product we build, the consistent quality from our team of craftsmen, and the designs of Paul Mann. We always strive to fulfill the needs and faithfully express the individuality of each owner of a Paul Mann custom boat.”

Mann continued, “The hand selected cherry and Carpathian elm burl sheet veneers featured in the Ann Warrick are among the cabinetry material that is light enough to help achieve the yacht owners’ desire for fast travel to world-class fishing and adventure destinations, while still being very pleasing to the eye.”

Paul Mann Custom Boats combines the heritage of true, traditional Carolina design with modern building techniques and materials technology. The style of Mann’s boats has evolved from the basic design tenets Paul Mann learned as he crewed, fished and built boats alongside the forefathers and originators of what is known as the Carolina style sportfisher. Primarily a frame and plank builder, the company now also offers jig-built designs.

Paul Mann has been building sportfishing yachts all his adult life and founded his own company in 1988. His team of craftsmen have built over 33 boats to date, ranging from 53 to 81 feet in length overall. in Award, Awards and Achievements, Hull 129, Product
0 Comments
0Like